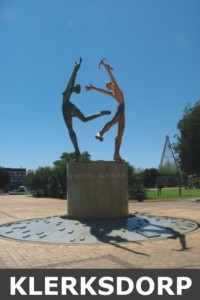 The city was founded in 1837 when the Voortrekkers settled on the banks of the Schoonspruit(“Clear stream”), which flows through the town. Klerksdorp is one of the oldest European (white) settlements of the former province of Transvaal.

The most prominent of the first settlers was C.M. du Plooy who claimed a farm of about 160 km², called it Elandsheuwel (“Hill of the Eland”). He gave plots of land and communal grazing rights on this farm to other Voortrekkers in return for their labour in building a dam and an irrigation canal. This collection of smallholdings was later given the name of Klerksdorp in honour of the firstlanddrost (magistrate) of the area, Jacob de Clercq.

In August 1886 gold was discovered in the Klerksdorp district by M.G. Jansen van Vuuren as well as on the Witwatersrand, which lies about 160 km to the east. As a consequence, thousands of fortune-seekers descended on the small village, turning it into a town with 70 taverns and even astock exchange of its own.

However, the nature of the gold reef demanded expensive and sophisticated equipment to mine and extract the gold, causing the majority of diggers to move away in the late 1890s and leading to a decline in the gold mining industry.

During the Second Boer War (1899-1902), heavy fighting occurred in the area, which also housed a large concentration camp. The most famous of the battles around Klerksdorp, is that of the Battle of Ysterspruit (Iron Stream), in which the Boer General, Koos de la Rey, achieved a great victory. The battle is one of the most celebrated of the general’s career, being the battle in which the Boer soldiers pioneered the art of firing from horseback. On April 11, 1902, Rooiwal, near Klerkdorp, saw the Battle of Rooiwal, the last major engagement of the war, where a Boer charge was beaten off by entrenched British troops.

The graves of the victims of the concentration camps, namely Boer women and children, can still be visited today in the old cemetery just outside of town, numbering just below a thousand.

Klerksdorp was connected by rail to Krugersdorp on 3 August 1897 and to Kimberley in 1906.

Today Klerksdorp is celebrated as the birthplace of Anglican Archbishop Emeritus Desmond Mpilo Tutu on October 7, 1931. He received theNobel Peace Prize in 1984 for his work towards “a democratic and just society without racial divisions”. The life work of Desmond Tutu has been to heal the scars left among the descendants of the many battles for control of South Africa. The irony of his birthplace set amidst Boer monuments and old battlefields, early settlements by those same Boers, among them famous leaders like Jacob de Clerq, even close toWitwatersrand where gold was discovered, cannot be allowed to pass unremarked. He somehow managed to rise beyond pettiness and division to bring all these forces together with displaced native peoples in places such as this creating an international role model. He was later awarded multiple worldwide honors for his achievements in the reconciliation of the ethnic and cultural divisions in the history of his country. (seehttp://www.nobelprize.org/nobel_prizes/peace/laureates/1984/tutu-bio.html)

The gold mining industry was revived by large mining companies in 1932, causing the town to undergo an economic revival, which accelerated after World War II.

Klerksdorp has a semi-arid climate (BSh/BSk, according to the Köppen climate classification), with warm to hot summers and cool, dry winters. The average annual precipitation is 482 mm (19 in), with most rainfall occurring mainly during summer.

The greater city area of Klerksdorp incorporates the towns of Orkney, Kanana, Stilfontein, Khuma, Hartbeesfontein and Tigane, giving it a population of more than 350,000 inhabitants (Census Statistics South Africa 2001). Together with Rustenburg, Klerksdorp forms the economic heart of North West Province. It is one of the hubs of the South African gold mining industry, although its importance has been decreasing in recent years. A major earthquake in March 2005 caused significant damage to the eastern suburb of Stilfontein and caused widespread damage to mining activities. It is expected to be a large uranium producer in the future.

Apart from mining, Klerksdorp is positioned as a notable medical, retail and educational centre for North West Province and Northern Free State.

The Klerksdorp district is a major contributor to South African agriculture; maize, sorghum, groundnuts and sunflower are important crops farmed in the district. Klerksdorp has the largest agricultural co-op in the southern hemisphere, named ‘Senwes’.

The farming district is also known for its Sussex cattle herds – the city is the headquarters of the South African Sussex Cattle Breeders Association.

Harry Oppenheimer stadium situated between Klerksdorp and Vaal River Operations is a popular sports field for some of the bigger schools’ athletics competitions. The stadium was originally considered as one of the host cities for the 2010 FIFA World Cup but lost its bid to the Rustenburg Royal Bafokeng Stadium.

Four private hospitals in the city lifts Klerksdorp’s medical status in the North West Province. Adding to this is the advanced cancer treatment at some hospitals drawing in patients from all over the district.

In comparison to other major towns and cities in South Africa, Klerksdorp is still considered one of the safer locations in the nation.

Other towns in the Klerksdorp district